You might imagine that a 40-person film crew would be an incredible invasion into a meditative community such as ours. But the filmmakers have felt so compatible that I relish being with them daily. Many have some connection to spirituality, or they’re just excellent individuals who were hand-picked for the project. 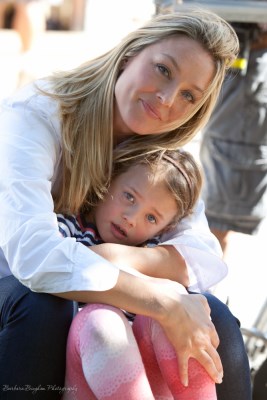 Elisabeth Rohm and her daughter, Easton, take a break from filming at Ananda Village.

Elisabeth Rohm was invited to play her part just days after she had prayed for a deepening of her spiritual life. Lis and her daughter, Easton, are enjoying themselves. Elisabeth has been a joy to work with, and we’ve been in every scene at Ananda together. In my “other” career as a cellist, I’ve been around celebrities, onstage and off, and I’ve seen what they can be like behind closed doors. Elisabeth is naturally gracious on and off the set, and she’s been tremendously patient with us.

What is this movie about? Primarily, the answers that Ananda can offer to the world, and how small communities can be a viable solution to many of society’s ills. Of course, spirituality is a broad theme (how could it not be?). Finally – beauty. I can’t post any footage, but I must tell you that the way they are capturing the vibration of Ananda is simply stunning. We get to see some of the shots on a monitor (the hard drives are 90 terabytes!), and the way the cinematographers and directors capture the interplay of light and color is amazing. The crane shots give you a sense that you’re flying through the gardens and natural settings.

Swami Kriyananda is featured in two lengthy interviews, and he’s doing fabulously. He’s a natural, though he’s joking that he doesn’t want to be a movie star. But he’s been amazingly patient during the three days of shooting the same scene from various camera angles, including multiple takes, sometimes due to technical problems or to get just the right sweep of the camera. 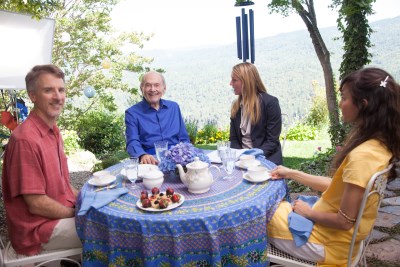 Swamiji’s answers are spontaneous, insightful, and funny and resonate with truth. In each take he gives a slightly different emphasis and never repeats himself. “Ever new, ever expanding joy.”

The work and the incredible coordination behind each scene are formidable. A scene often includes at least four camera shots: a “master shot” (a wide-angle to give the viewer a sense of where the characters are); a “two-shot” (two or more people in the frame), reverses or “point of views” of the same shot (from behind the characters), and close-up shots of each character. Each shot requires moving massive cameras, lights, tripods, baffles, reflectors, and shades. As an “actor’“ there’s a lot of sitting around while this happens. A scene can take hours to shoot, but then sometimes they’re ready and waiting for us to finish makeup and wardrobe.

So far in the filming we’ve introduced Swami Kriyananda, Lalita, Narayani, Ananta, Alex and Devadasi Forrester, and me as Juliet’s host. The Ananda cast members have done a great job, especially considering that we’re all improvising our roles. None of us are speaking scripted lines; we’re talking naturally from the heart, in our own words. For me it’s not an easy process. I enjoy writing because it gives me a chance to think about what I want to say, try different approaches, and edit to my heart’s content. But everyone seems happy with what we’re doing. I do hope they’ll reshoot the first scene, where I was still in shock about the magnitude of the project.

The entire community has been impacted by the film. We’re trying to stay within a very low budget, so we’re asking people for lots of volunteer help. The community has been very supportive. Many have been initiated into the film business as they volunteer as extras, drivers, assistants, and coordinators. The set has a wonderful vibration, and everyone seems happy to help.