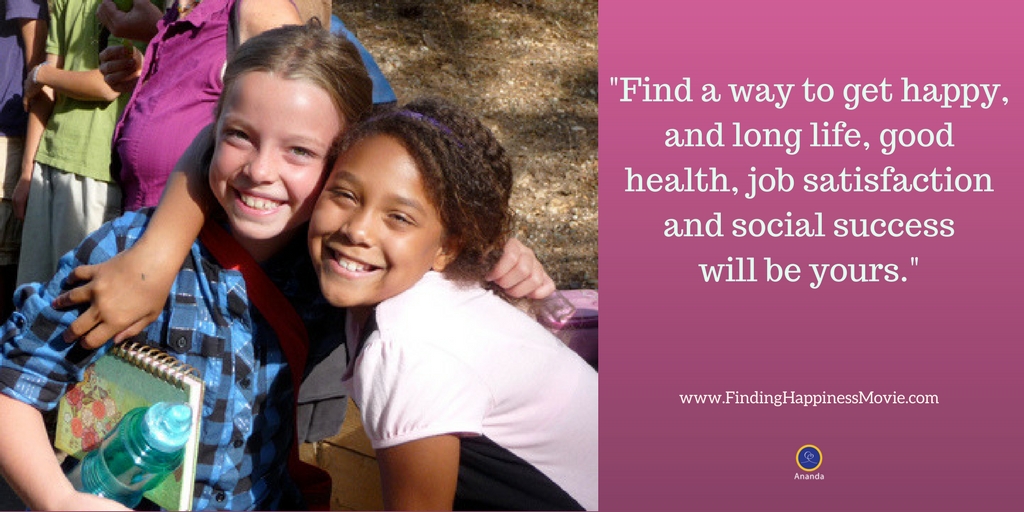 I don’t read the papers much, but several years ago I came across an article in the Sacramento Bee that fairly begged to be disbelieved.

In a Journal of Medical Ethics article titled “A Proposal to Classify Happiness as a Psychiatric Disorder,” Liverpool University psychologist Richard P. Bentall argues that the so?called syndrome of happiness is a diagnosable mood disturbance that should be included in standard taxonomies of mental illness such as the American Psychiatric Association’s Diagnostic and Statistical Manual. Happiness, as Bentall states in his abstract, is “statistically abnormal, consists of a discrete cluster of symptoms, is associated with a range of cognitive abnormalities and probably reflects the abnormal functioning of the central nervous system.” (In this regard, as Bentall later notes, happiness resembles other psychiatric disorders such as depression and schizophrenia.)

The author of the Bee article, New Republic contributing editor Maggie Scarf, related Dr. Bentall’s suggestion “that the term ‘happiness’ be removed from future editions of the major diagnostic manuals, to be replaced by the formal description ‘major affective disorder, pleasant type.’”

When I read the article aloud to a friend, she doubled over with major affective disorder, pleasant type.

The Practice of Happiness

It is nutty-cakes. And yet, is there anything actually wrong with using scientific methods to study happiness? After all, it’s what the spiritual explorers of all ages have done – studying happiness in the laboratory of their bodies, hearts, and minds, and keeping tidy notes of what works and what doesn’t.

For most of us, at any rate, happiness is hardly a “diagnosable mood disturbance” – it’s the answer we’re seeking. And if we can get more of it with the help of scientific orderliness and method, so much the better.

That’s the message of Finding Happiness. The film reveals how the members of nine small intentional communities scattered around the globe have made happiness the cornerstone of their lives for more than forty-five years.

(Disclaimer: I’ve lived in the Ananda communities for 40 years.)

Because the world’s spiritual adepts have made a specialty of researching the factors that increase happiness and decrease suffering, what they say may be particularly worth hearing, in these times of pandemic unhappiness. 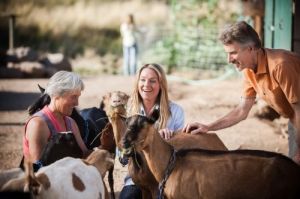 After all, their approach is practical. They tell us, for example, that we’ve been born with five instruments that we can use to boost our happiness – the body, heart, will, mind, and soul. And they further explain that as we grow up, we pass through five stages, each of which lasts about six years, during which these “happiness tools,” in the order listed, become the prime focus.

Happiness, they tell us, increases as we learn to use the tools “expansively.” (More on “expansion” later.) Thus, the most important time of our lives for learning to nurture and increase our happiness is when we’re growing up.

From birth to age 6, an infant must learn to use its body and senses. From 6 to 12, feelings come to the fore – these are the years when children are highly receptive to learning through the media of feeling – the arts, including stories, music, theater, painting, and dance.

From 12 to 18, teenagers embrace challenges to their will power, in preparation for independent adult life. At around 18, young people become fascinated with the life of the mind, engaging in endless discussions of politics, science, the arts, and philosophy. Finally, at around 24, many people experience significant life events that may precede a spiritual awakening.

As each tool takes center stage, the others don’t simply fade away. Thus, while a toddler’s primary challenge is to gain a certain level of mastery over its body and senses, it will also express its feelings – with the volume turned up! Nor do the stages begin precisely on one’s 6th, 12th, 18th, and 24th birthday; the transitions are gradual.

Why did nature decide on this particular system? In his insightful book, Education for Life, the founder of Ananda, Swami Kriyananda (writing under his American name, J.?Donald Walters) explains how each tool prepares the child for the stage that follows. Thus, feeling comes before will power, because feeling is the faculty that enables us to tell right from wrong. Before we can use our will power appropriately, with sensitive awareness of others’ realities, we need to develop our ability to feel their realities. Walters laments the ruinous consequences of cramming children’s minds with facts at the expense of nurturing and refining their capacity to feel, as is customary in schools today.

Here’s another way to look at it: each stage fulfills the preceding one. Thus, feeling motivates us to action, and will power gives us the energy to act on our feelings. Will power, in turn, finds its fulfillment in wisdom, which tells us which actions will give us the greatest happiness. And wisdom is fulfilled in spiritual practice – because in Self-realization, we unite our consciousness with the source of all wisdom and joy.

The history of education reveals that in ancient Greece and Rome, and throughout the Middle Ages and Enlightenment, the six-year stages were recognized as natural phases of a child’s life. Thus, appropriate teaching methods were devised for each stage, and schools were divided into the rough equivalents of our modern elementary school (age 6-12), junior and senior high (12-18), and college (18-24).

As I hinted above, the spiritual teachings of all ages tell us that happiness comes by using our five human tools “expansively.” Like most abstractions, “expansion” is most easily understood with examples.

Consider what happens when we begin an exercise program. After the first two or three weeks, we find ourselves feeling happier and more alive. Why? Because the exercising body is generating more energy that spills over to nourish our feelings, will, and mind, expanding their range and force. Expanding our awareness through one “tool,” the body, has influenced the others. Good actions spread their effects – as do “bad” ones.

People tend to “specialize” in one or perhaps two of the “tools of expansion.” Thus, some of us go more by feeling, while others tend to lead with their willpower or mind. The spiritual teachings advise us to “go with our strengths,” and work to correct any weaknesses.

In many natural processes, the “tools of happiness” tend to appear in the same order as in a child’s development. When we fall in love, for example, the first attraction is generally, though not invariably physical. We see a person across the room whose appearance attracts us, and our feelings become aroused. We form a volition to act on our feelings, and we walk over and strike up a conversation. The mind probes for information: Is she married? Does he like children? And, if we’re wise, we’ll consult a higher guidance before entering this new life venture. We’ve passed through the five “tools” in order: body, feeling, will, mind, soul.

The System Is Rigged

It all sounds so straightforward: simply use the tools expansively and happiness will follow – rather like remembering to brush our teeth in the morning. But in real life, cultivating expansive attitudes turns out to be a challenge. That’s because the opposite urge, contraction, is strong in us also.

Life places essentially the same choice continually before us: will we use our bodies wisely, or allow them to decay? Our hearts, to love, or to hate? Our minds, to be wise, or merely clever? Our spiritual instincts, to aspire inwardly, or to dabble in psychic trivialities. History – ours and the world’s – is the eternal struggle between these two forces in human nature.

Also, the theory is simple, but the details are not. We’ve been given all of the tools we need to achieve happiness and success – or so it seems. The trouble is, relying too exclusively on our purely human tools, we find ourselves sooner or later bumping against their built-in limitations.

The five tools of expansion embody wonderful expertise, yet their very specialization can trip us. When that happens, we can still find answers by looking beyond the tools. Happily, we can use those same instruments to tap into an awareness that is endlessly wise and loving, and that has our best interests at heart.

But what of Professor Bentall? Researchers are discovering that happiness is good medicine. Shawn Achor, author of The Happiness Advantage, found that the most successful Harvard freshmen were not those who resolved to hole-up in the library and grind out good grades; they were the happiest students, who formed study groups and carried a positive, life-affirming attitude to their studies. And scientists at Heartmath Institute are discovering that expansive attitudes powerfully contribute to the health and efficient functioning of our bodies and brains.

A study of nuns found that those who lived longest were unrepentantly happy, and those who were disappointed with their vocation and bitter died at a younger age. From a London Times article on the study:

It’s difficult to resist the logic of the happiness doctors. Stay in your Eeyore-ish bubble of existentialist angst and have a life that’s short, sickly, friendless and self-obsessed. Or find a way to get happy, and long life, good health, job satisfaction and social success will be yours.

Find a Finding Happiness Movie Screening in your area.