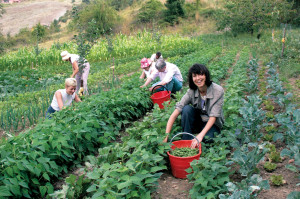 Learn about the spiritual approach to living in community and in harmony with the land. An interview with Atman Goering, the community manager at the Ananda world brotherhood community in California.

Q: In the movie, you talk about a spiritual approach to stewarding the earth’s resources. Can you elaborate on that? Perhaps you could start with your background.

Atman: I grew up on the East Coast and attended Princeton University, where I got a degree in civil engineering with an interest in energy and environmental issues. After graduation I worked for a consulting firm in Washington, DC, on projects related to energy, sustainability, air pollution, and so on.

After a time I realized that the work wasn’t fulfilling for me, and I decided to do something different for a while. I managed to get a scholarship for graduate study in France, researching environmental energy planning. We happened to be in Grenoble, at the foot of the French Alps, so I was able to spend lots of time skiing and mountain climbing. (laughs)

I took a year off to travel, then I returned to the US for further graduate study at UC Berkeley, in an interdisciplinary program on energy and environmental issues.

While I was in Europe I had started meditating. A friend in Berkeley who knew I was interested in spiritual things introduced me to a Sivananda ashram, and I got heavily involved in yoga while I finished my master’s degree.

I was working at Lawrence Berkeley Laboratory on energy demand analysis, and that’s where I met Helena Norberg-Hodge, a visitor to our department who had started the Ladakh Project. Ladakh is a very isolated region of India, on the far side of the Himalayas, on the Tibetan Plateau.

In the early 1960s China invaded Ladakh, and China and India fought a border war. The Indians managed to push the Chinese back, and at that point the Indian government decided it should make a stronger claim on Ladakh, so they built a road over the Himalayas through Kashmir. In the seventies they opened it to outsiders, and Helena went there with a National Geographic film crew.

She quickly realized how isolated the Ladakhi people had been, and how rapidly their world was changing, thanks to development projects, the introduction of a western-style school curriculum, and tourism.

Helena recognized that it was an amazingly intact culture, with a very strong sense of community, and a strong sense of its spiritual roots in Tibetan Buddhism. It had been a thriving, self-sufficient society until the outside world came in. And now it was being turned upside down, as people were saying, “You aren’t modern enough. We need to get your kids educated.”

The culture was being broken up, primarily by these development programs. They would do things like try to introduce “green revolution” hybrid seeds and pesticides, even though there weren’t really any pests, and the seeds weren’t adapted for growing barley at 12,000 feet elevation. The Ladakhis were very aware of what was appropriate for the harsh environment they were in.

The Ladakh Project tried to help people understand that everything wasn’t as hunky-dory in the West as they were being led to believe – that baking bread on sheets of asbestos wasn’t all that great an improvement, for example, and that what their kids were learning in the new schools was disruptive to their culture. They weren’t even being taught their own language – instead, they were taught three other languages with three different alphabets.

We tried to let people know about the problems in the West: the alienation, the lack of community, and the lack of sustainable ways of doing things. Which isn’t to say that the Ladakhi culture couldn’t be helped, because there certainly was room for material improvements.

I worked on the project for a number of years, and it was from that experience that my wife Bhaktimarg and I became interested in communities. We had seen the benefits of a close-knit community, and we’d observed the remarkable joie de vivre of the Ladakhi people.

At one point we thought about starting a community with the directors of the Ladakh project. We visited various communities, and we looked at land in Spain, and then we found Ananda.

I discovered Ananda rather serendipitously at a Whole Life Expo where I’d gone to hear Timothy Leary speak. I missed Leary’s talk, but I found an Ananda brochure lying on the floor, and I said, “We should visit here.” (laughs) We felt an immediate connection with Ananda, and we started visiting regularly.

I was in a PhD program at the time, writing a dissertation based on my experiences in Ladakh, and examining the contradictions in the sustainable development debate.

I felt we needed to challenge certain key assumptions. For example, that the world should follow a western materialistic model for development, without questioning whether those materialistic values were causing some of the sustainability issues in the first place.

I had gotten a grant to write my dissertation, but then I moved to Ananda Village and never finished my thesis. I worked at the meditation retreat and the Expanding Light guest retreat, and then I was asked to serve as village manager, the position I’ve held for 12 years.

Q: Has living at Ananda helped you integrate your interests in sustainability, communities, and the spiritual life?

Atman: Yes. The most important thing for me was the search for “ultimate verities,” as Yogananda calls it. I felt it was a major defect of the sustainability movement that it failed to address why people have seemingly inexhaustible desires for material things in the first place. It was assumed that happiness comes by acquiring material things, and that we simply need to supply people with those things in ways that don’t damage the planet.

The problem with that view is that human desires are insatiable. And at some point, if you’re really going to create sustainability, you have to address that.

In the film, Swami Kriyananda remarks that what will ultimately help the world is a change in consciousness. We need to start by examining what truly makes us happy, what we really need, and the blessings of a simple life.

We obviously need to find better ways to live on the planet, and we need to do it quickly. We can’t wait for everybody’s consciousness to change. But it’s important to recognize that we’re living in a society that endlessly promotes the idea that happiness comes from outside, and from what we own. I believe one of the major contributions communities like Ananda can make to the sustainability debate is that we should first ask ourselves, “Where does my happiness really come from?”

I think the real contribution that people can take from Ananda is that you need to question what’s driving your life. The message of the movie is that happiness comes through your relationships with people and your relationship with God, and by simplifying your life – and that these things will serendipitously do a lot for the planet. In fact, I believe they’ll do more than putting up solar panels alone can do, although we do need both.

When I was traveling, I visited North Africa and China, and I realized, “There are no answers here.” Wherever I went, my mind came with me, and I realized it was creating the same patterns of unhappiness wherever I went. So I learned to meditate, and I learned that happiness isn’t about having lots of outward experiences and going to different places.

I had worked in the circles of power in Washington, DC, and I’d realized, my gosh, these people are full of problems, too – this senator’s an alcoholic, and so on. And when I considered that these were the people running the country, it was a bit disillusioning.

I realized it wasn’t what I wanted to do. I had received a very good education, and I could have served the nation in high-powered positions. But I thought, “This isn’t going to do it for me.” Then I found an Ananda, and I realized, this is a lot more promising. This is what’s going to change me, and what’s ultimately going to change the world.