Elisabeth talks about the role of Juliet, and how her personal spiritual search found renewal during filming at Ananda Village.

How did you become involved in Finding Happiness?

By divine intervention, actually. About a week before the call came, I was feeling an active longing to deepen my spirituality. My mother had passed away recently. She was a dharmic person and the one I would call whenever I wanted to know the right thing to do. I was feeling lost without her, and in need of guidance.

Once you have a child, you’re even more intent on listening to your inner voice, because you have to guide them. When you lose your mother, you can no longer ask for her advice, so you want to deepen your awareness of the inner voice, and you begin to want to hear God speaking to you.

I was telling God, “I need guidance on a daily basis.” And a week later I got the call asking if I wanted to be part of the film. The casting agent had learned that I’d been exposed to eastern thought as a child, and he wondered if I might have a personal interest in the film – which of course I did. I met with Shivani, the executive producer, and in that moment it became clear that I needed to do this.

I had an appointment to call Swami Kriyananda, and I feared he might grill me about my spiritual qualifications. But he was very brief, saying simply, “I like your eyes. Yes, let’s do this.”

How was it to be with Swami Kriyananda?

When you’re in the presence of someone like Swami, it’s easy to slip into the ego, because you can start to think that you must be pretty profound if you’re getting to be with a saint.

As I tried to transcend the privilege of being with him, and get beyond reacting from a “me” viewpoint, I realized that I was truly in the presence of God and that it had nothing to do with us. God was simply there, and I began to find myself in a quiet place where I could be receptive to the divine experience.

He’s funny and human, which makes being with him simple rather than complex. He is one of those people who make loving God seem very easy and simple.

In the final scene of the movie you are visibly moved. How much of that was you, and how much was it playing the role of Juliet?

I came to the film with a personal, inner quest to deepen as a person. At the same time, I’m always looking for what will advance the story in the most believable and dramatic way. I was aware that what would serve the movie and the viewers is that Juliet comes with skepticism and curiosity, and maybe a little judgment and discomfort with the lifestyle at Ananda. 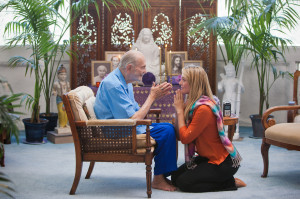 There were times when I was in character and very out of touch with my personal self, even in the scenes where I spent time with Swami. Because it doesn’t serve the movie if it’s about Elisabeth the actress. But I also wanted the film to have some resonance with what was important to me, and I think that what serves the movie best in that final scene is that I’m myself.

After trying to be as truthful to a character as possible, it can be uncomfortable to put your “real self” on film. But if you’re ready for it, and you find yourself in a place like this, it can’t help but do something to you as a person. “Juliet” didn’t come for that experience, and for her it happened “accidentally.” It might not have happened to me, and if that were the case I would have acted Juliet’s role.  But it happened.

In the last scene with Swamiji I made a deliberate choice to be myself. When I asked him to bless me, it was the first time I was receiving his blessing as Elisabeth. Before the scene, standing and waiting, I thought, “Let them see what you came for. It’s okay. It’s the most vulnerable you’re ever going to be on film, but it will serve people.”

When you see someone experience an opening like this, a completely real transformation that’s captured on film, it’s like the yoga concept of shaktipat, where a saint blesses you and God’s energy goes into you. This movie has that quality. In part, it’s because something very real happened to me at Ananda. For anybody seeking God, whether they want to live in a community or not, I hope that experiencing this movie will be like a jolt of spiritual awakening.

How difficult or easy is it to incorporate your spirituality into the work you do in film?

Over the years I’ve realized that if I’m very quiet before I perform, and if I’m prayerful before I go to work, actively praying in gratitude, I have a much better day and I can give a much better performance. It takes me out of being reactive and enables me to “get out of the way.”

Swami Kriyananda says a similar thing about his writing. “I don’t write – God writes.” I find that acting is more interesting if, before I do my work, I ask, “What is this supposed to be?” – and then get out of the way and let God show me how to do it, so I’m a vessel.

If you can do that, even if you’re playing someone of low consciousness, that aspect of higher creativity will be seen. Ultimately I think you can offer your creativity to a higher power, so that it has a subtle resonance for people, beyond your intellectual choices for the performance.

Do you believe that kind of inspiration can be captured on film, not only visually and audibly but energetically?

Absolutely. Some filmmakers like to work without scripts, or they’ll work with people who aren’t actors, because an unrehearsed authenticity comes into the picture, and it’s energetically more divine, because it’s real.

Because actors are always trying to be real, the results might not always be vibrationally high, because there’s so much thought involved, more than a real and natural quality of feeling.

I think that’s the essential trick for an actor, to let go of the rehearsing, the memorization, and the choices, and just fly. The art of acting can be very high vibrationally, because what you’re learning is to be. When you start to “act,” it falls apart.

Are there directors that I really love, actors I admire? Absolutely. But it’s ironic how you end up working with whoever you’re supposed to work with. If you look at the puzzle pieces of your life as an artist, you can see how they fit together perfectly.

I love doing TV, I love doing film, and I love writing. When I was in college I wanted to be an author, and I wrote a book and self-published it. I was disappointed with the results, so I threw my toys in a box and said “I don’t want to write anymore.”

But, really, I feel I’m meant to be a writer, and it “just happened” that I got a blog on PeopleMagazine.com that re-awakened that love. Out of that came a book deal that will serve people better than any of my previous books.

You let go of something, and it plops in your lap when you’re ready to do something that’s more valuable.

Do you see acting as a vehicle for spiritual development?

Elisabeth (Juliet; center) with Virani and co-star David Eby during a visit to the Yogoata Goat Farm and co-op at Ananda Village. (Click to enlarge.)

You begin to realize that you’re not this little self – that you have an opportunity to be a channel for something much deeper. I think many people who are highly successful are deeply spiritual, and you can see how they let go when they’re on stage, whether they’re acting or singing. You can see that they’ve completely let go of the wheel. Watching them is an angelic experience, because they are just somewhere else.

So it can be inspiring, and if you’re ready to take that step, you find that being “me” becomes boring. As you move along, you begin to realize that your light isn’t about you – that God gave it to you to serve others.