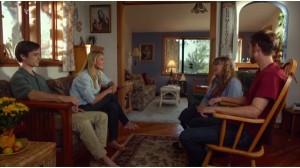 An interview with Mary Kretzmann, on what it was like raising and supporting a family in a spiritual community.

Q: In the movie, you describe how the community supported you at the time of your husband Tim’s passing. Are there other things you wish you’d had time to say?

Mary: I wish I’d been able to talk about raising spiritual children. I think it was a special calling of ours to help set an example for spiritualizing family life, at a time when it’s sorely needed in the world.
Tim was a peaceful, joyful, spiritual man. His passing was sacred and blissful. It came soon after we completed our sacred journey together of raising our children in a spiritual way. He died when our youngest son was 19 and had recently left home.

The heartache of losing a dear husband and father has moved us to live up to our spiritual potential every more deeply. It powerfully emphasized for us that the meaning of life is to go ever deeper in God. We know this from our spiritual teachings, and now it feels as if our lives can never be quite as comfortable, and that the only reliable comfort will come by trying to feel God’s bliss.

Q: What were some of the things you did to raise spiritual children?

Mary: One of the most important things was that we read spiritual stories to them regularly, along with saying bedtime prayers. From the time our first child was very young, it became my hobby to collect spiritual stories from many traditions.

Another thing was that we involved them in the spiritual life of the community. When Peter was thirteen, I said, “We want you to go to the regular adult Sunday service.” We had been attending special weekly services for school-age kids, and we felt it was time for him to be part of the adult community.

I said, “Yeah, we want you to go to Sunday service. Or you can come up with an alternate program of focused spiritual study.”

He said, “Gosh, it’s easier just to go to service.”

He did, and we felt it was an important influence. I said, “The cops would be at my door if I didn’t send you to regular school, and I want you to have some spiritual teaching, too. You can choose Sunday service, or you can come up with another plan, but it has to be at least an hour every week.

We made that rule for all our children. When Krishnabai was young, she would scour the village newsletter for spiritual gatherings – she liked to go to baby showers and other events where there would be chanting and prayer. I would let anything count, but it had to be at least an hour a week, like clockwork. I started Krishnabai at 18 months. We would attend a chanting kirtan on Sunday afternoon together, and I remember how much she loved it.
As the years passed, I realized that the weekly satsang was one of the most important influences we could have on them as parents.

An amusing thing happened when David was nine. For several Sundays, he asked if he could go to the purification ceremony instead of Sunday service, which starts an hour later.
I said, “Okay.” But I was thinking, “Why on earth does he want to go to purification? He isn’t even old enough to sin!” I mean, what was he purifying? (laughs)

I finally figured out that the Sacramento Kings were in the NBA playoffs, and he wanted to watch the games. He was just nine, but he figured out a way to follow the family rules and get what he wanted.

Q: It seems you were fairly strict with your kids.

Mary: I realized that spiritual child-raising isn’t only about the lovey-dovey-kissy stuff. It’s about the mother having some will in her children’s lives. We didn’t force our children to go to service, but the required weekly hour of spiritual instruction, added to our regular daily prayers and spiritual stories, became a powerful influence in our family.

For one thing, the children got used to being part of the spiritual life of the larger community. We gave them an opportunity to express their free will in a positive way, but not in a purely rejecting way. This is where I would often see other parents cave in. If the child didn’t want to go to Sunday service, they didn’t know how to address the situation with creative alternatives.

I was raised Catholic. It’s popular these days to bash the Church, but I got something positive from the experience. I learned to love God, Christ, and the Divine Mother. I felt that love deeply in my heart. Every night after bedtime prayers, I would see a mystical light. It made me feel happy and loved. This went on for my entire childhood. All I knew was that the light came from my loving Jesus and Mary. It was only when I learned of Yogananda’s teachings that I realized I’d been seeing the light of the spiritual eye as a child. And when I had children, I wanted to offer them opportunities to awaken the love of the Divine in their hearts.

I was aware that the church gave my parents a framework for a spiritual life within the family, and I took some of that structure from my childhood memories. I didn’t force my kids to go to church, but I feel very strongly that having a degree of form and discipline greatly helped them.

I felt it would be a disservice to “wait and see” how they might or might not develop a spiritual life. Or let them decide for themselves whether they wanted to be “spiritual” as they grew up. That’s a common thought in the New Age movement. I think we should water the child’s spiritual nature from what we’ve learned. Otherwise, what’s the point of being a parent?

From the lives of the saints we learn that spirituality isn’t about rigid dogmas; it’s the foundation for expansive attitudes such as kindness, friendship, and compassion.

They learned a great deal from the saints of different paths – Buddha, Krishna, Christ, Catholic saints, and saints of India. I wanted them to grow up so that if they ever felt they had to rebel against me or against Ananda, it wouldn’t even occur to them to rebel against God, because it would be like rebelling against the air.

That was my goal. And then it was a question of working with stories and prayers over the years, and ensuring that they spent spiritual time with the wider community.
We raised them on our path as a foundation for a universal spirituality. I would start them in the cradle, lovingly saying prayers aloud to our Masters. And I would watch for any signs that might help me understand this particular soul’s spiritual inclinations.

Yogananda said we should start children on the spiritual path before age three. I believe he meant we should say prayers and share spiritual stories with them, to awaken a love for God and the saints in their hearts.
I was always on the lookout for opportunities to help them gain insights into questions that would be bound to come up in their lives. A small example was when Peter and I watched a Whoopi Goldberg movie together. He was nine, and we watched Sister Act. Until then, we had barely watched any PG-rated movies, but I thought, okay, I’ll watch it with him.

When the mafia guys started beating up Whoopi Goldberg, I could see that he was getting upset. As adults, we know it’s comedic, but he was alarmed that those men would beat up someone as nice as Whoopi Goldberg. So I paused the movie, and I said, “Do you know how to watch a scene like this?”

I said, “No, it’s very real. In fact, it’s way more real than this. The way you do it is you say, ‘Drugs are what pays this guy’s salary. Drugs pay the mafia’s salary.’ And you say, ‘I’m never giving money to those guys! I’ll NEVER DO DRUGS!’ That’s how you watch a scene like this.”

His eyes got real big, like, “Okay, Mom.” And we went back to the movie. I don’t think I was overdoing it, though others might disagree.

When they got a little older and I would pause a movie, they would beat me to my point. But I must say, if you have any moral standards, you really can’t watch many movies nowadays.

You have to take a stand on drugs starting when they’re very young, even in a community like Ananda. We live in a rural area that’s been plagued by drugs over the years, and it’s out there beyond the community’s borders. I modeled my example on the strong mothers in the ‘hood who were determined to keep their kids off drugs. That’s how strong I felt I had to be.

It’s tempting to think, “Of course my kid’s spiritual. After all, we’re living in a spiritual community.” But my thought is, “Yes, and the sharks are just outside the property lines.”

I have a great deal of respect for one of the mothers at Ananda. Her son was energetic, adventurous, and could sometimes be a handful. When he told her he wanted to go to the local high school instead of the high school in the community, she said, “I have to let you know, honey, that if you do drugs we’ll have to find a separate place for you to live.” She said, “If you make that personal choice, we will always love you, but you have to know what will happen.”

He said, “What?! You would choose Ananda over me?!”

She said, “No, honey, you would have chosen drugs over us.”

The easy part of spiritual parenting is the first twelve years, when the parents have more influence. When they reach the teenage years, the need for guidance goes on, but the focus changes, and at a certain point you may only be able to help them by praying for them. Until then, we can consciously water spiritual seeds in our children, through our prayers and by sharing daily spiritual stories.

Even though I’m done with the parenting phase of my life, it continues to have power for me, because it was so blessed. When Tim passed, I felt him telling me, “Our family was beautiful. See it as a cosmic expression.”