When Asha was enlisted as the emergency script coordinator for Finding Happiness star Elisabeth Rohm’s interviews with Ananda members, she had to figure out her job on the fly. 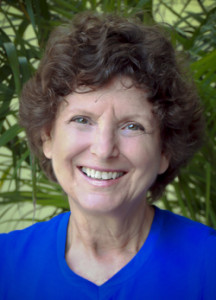 Q: How did you get involved with Finding Happiness?

Asha: My role in the movie actually came about by happenstance. I was invited to keep track of the lines that were being said by the “actors,” all of whom were in fact Ananda members, speaking their own thoughts in their own voices. The sole exceptions were Juliet, the principal role played by actress Elisabeth Rohm, and a brief part played by actor John M. Jackson.

We didn’t have a fixed script, and we wanted to make sure that everything the real-life Ananda people who had roles in the movie wanted to say, they could say fully and clearly. The idea was that I would keep track of the content. But as soon as we began filming, we realized that we really needed to frame the scenes a lot more tightly than we’d imagined, and that’s when my role greatly expanded.

We were shooting a feature film, so we couldn’t just let people talk, and come back later and collect their best comments. We simply couldn’t spend that many hours filming, because it would be too prohibitively expensive. So we found a better way.

Instead of waiting until a person had talked for as long as they liked to see if they had said everything they wanted, we began framing out the scenes. I would talk with the “actors” before they want on camera, and they would tell me in their own words what they wanted to say. Working together, we would put a smaller box around it, to avoid any rambling and diversions that could quickly become expensive.

Because we only realized the need for tighter control at the last moment, as the first round of filming started, it felt like we were always hopping a step ahead of the camera. Even during the second filming six or eight weeks later, I spent an enormous amount of time scrambling to figure out what the actors wanted to say, and how they could say it economically.

I was on the set every minute of the filming, literally. Mostly, we would frame the dialogue in the off hours. The actors in a scene would give me their notion of what they wanted to talk about, and I would make suggestions, and then they would give it further thought. I never scripted their words, because we knew that the film would draw its power from their sincerity, spontaneity, and natural expression. It’s why they sound like themselves in the film, because none of it was scripted.

My working method was that I would generally talk to them at great length and take notes of what they said. Then I would go away and pull from their words what they seemed to feel was important to get across. We would discuss how they could express it more clearly and economically, and whether our present choices were right.

So I was deeply involved in the content. But it wasn’t until I saw the finished film that I realized the extent to which every individual was living and breathing their own thoughts from their own reality. And even more touchingly, how they were able to offer it back in a completely natural way, from their own understanding.

Everybody in the film is different, yet each one has pulled from their life at Ananda the bit that works for them. I believe people will sit through the movie, and from one person or another in the cast they’ll receive an understanding that they can put into their heart.

At first they love the vibrations of peace and harmony, the beauty of nature, the music, the people, the spiritually uplifting atmosphere. Then you begin to understand, little by little, where the vibrations are coming from. It’s from the way of life, which people can practice anywhere. It’s about “simple living and high thinking,” as Paramhansa Yogananda put it when he spoke about spiritual communities.

Q: Did you talk about the movie with Swami Kriyananda?

A: I had the opportunity to show him an early version. It was the “director’s cut,” not the final version, but it was close, and he was seeing it for the first time. His immediate reaction was, “This movie encapsulates my life’s work.”

In the movie, Ananda is presented by the people of Ananda. So it wasn’t that Swami Kriyananda saw his own understanding reflected. But he saw an original articulation of the principles, and he was deeply pleased that it accurately reflected the principles of Ananda.

It’s no coincidence that his life ended just a few months after the movie was completed. There was a divine harmony in the fact that this new expression of the philosophy of happiness was presented to him in the last months of his life.