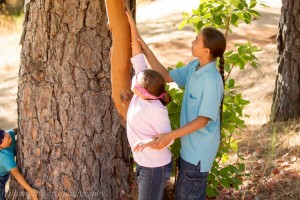 Joseph Bharat Cornell is a nature educator who works with nature awareness around the world. Joseph’s first book, Sharing Nature with Children, has sold more than 500,000 copies in more than 20 languages.

Backpacker magazine called him “one of the most highly regarded nature educators in the world today.” He currently works with nature awareness groups in the US, Japan, Germany, Brazil, Taiwan, Slovenia, and Great Britain. To date, he has taught his Sharing Nature methods in 30 countries and 46 states.

Joseph was born in Live Oak, a small town in northern California, fortuitously located just five miles from the Gray Lodge Wildlife Area, where he spent countless happy hours exploring nature as a young boy. Joseph and his wife Anandi have lived at Ananda Village for over 40 years.

His latest book, The Sky and Earth Touched Me, will be published in Fall 2013. To learn more, follow the link to the website of Sharing Nature Worldwide.

Q: How can people feel closer to nature and discover nature’s healing power? Let’s imagine that we’re enthusiastic hikers or backpackers, but we feel a sense of separation, as if we’ve been looking at nature from the outside, and we’d like to go deeper.

Joseph: Many people who’ve attended my workshops have expressed this very common longing to know nature more intimately, from a level of the heart.

I have a friend who teaches a mixed class of Caucasian and Navaho children. When he asked them to draw a picture of themselves, the Caucasian children drew covered the paper with self-portraits, drawing their faces and bodies. But the Navaho children drew themselves very small and off to the side of the paper, and then they drew the dry desert wash, the canyon walls, and the sky. They felt that the environment was as much a part of them as their arms and legs.

This is a feeling we can have in nature, that we’re an inseparable part of something much larger than ourselves. In nature there’s no ego, and if you can step away from the usual hearty give-and-take of human society (laughs), it can be a very refreshing experience.

Walt Whitman expressed this yearning when he wrote, “I long to live with the animals, they are so placid and self-contained.”

But that experience of communion can only grow deep in stillness. John Muir said that in the stillness of the wilderness, “the freed soul goes abroad.” By learning to enter the stillness, we can expand our awareness beyond ourselves in a way that’s very enjoyable and renewing.

That’s really the secret of experiencing nature – to internalize our awareness and become very quiet internally.

The mind is like a shortwave radio that has two modes: Send and Receive. A study showed that people have 300 self-talk thoughts per minute – some sources say we may have as many as 1200. When you’re continually sending, there’s no room to be open and receptive. You can talk to the environment, but you can’t listen. We need to learn how to turn off the self-talk and tune our radio to Receive, because that’s when we can commune with the world around us.

It’s why I created nature awareness exercises that help people stop the endless stream of thoughts and absorb their awareness in the natural world.

A Harvard study in 2012 found that people don’t focus on what they’re doing 47 percent of the time, even if they like what they’re doing! (laughs) So the problem is that we simply don’t have enough attention and receptivity to take nature in.

Of course, sometimes it can happen spontaneously – we’re outdoors on a crisp fall day and feeling unusually receptive, and we sense that everything’s alive. But those moments come and go randomly.

People treasure their experiences of joy and transcendent unity in nature. But those experiences seem to come by a special whim of the universe. We may only have a handful of them in our lives, but if we can quiet the mind with nature awareness techniques or meditation, we can turn those isolated peaks of inspiration into broad plateaus of lasting inspiration. It simply takes focusing our attention fully on nature and opening up to the stillness within.

Q: It sounds like the experience people describe when they’re backpacking, and they start to feel the city fall away. They rediscover a childlike joy, where they’re no longer suspicious of the stranger, because their hearts are open.

Joseph: Colin Fletcher, author of The Complete Walker, described that experience, how the mind by slow degrees falls in sync with nature’s rhythms.

One of the participants in a Sharing Nature workshop was schoolteacher who spends his summers hiking the Appalachian and Pacific Crest Trails in alternate years.

We did an exercise called “I Am the Mountain,” where one person looks at nature and another person stands behind him and says, “I am….” Then the first person feels the living energy of nature inside himself for a few seconds. Then he might say, “The waving branches.” Or, “The light racing across the water with the wind.”

This man said that in four minutes of doing that exercise he reached a place of inner stillness and communion that it would normally take him a month to get to in the wilderness. It was quite a statement, yet many people have said similar things after they’ve gotten still and interiorized.

The method is simple – it’s simply internalizing your awareness. If you think that nature is “out there,” it will remain out there, separate from you. But if you receive nature inside, you’ll feel that nature is a part of you.

There’s a book called I Was a Savage, by Prince Modupe, a West African whose tribe had never seen a white person. He said, “Deeply felt silences are the core of our religion. During these times, the nature within ourselves finds unity… in the common nature which pervades all life.”

Q: We hear about “going into the silence.” Can nature be part of a spiritual practice?

Joseph: My most recent book, The Sky and Earth Touched Me, uses nature as a focus for a non-dogmatic approach to spirituality. The exercises aren’t couched in religious terms, but they help people have experiences of universal love, stillness, and self-expansion, which are deeply spiritual qualities.

John Muir said, “Nature, God, and beauty are synonymous terms.” In nature you can feel an intense joy. I believe it’s a window to the bliss of God that the great sages tell us underlies all creation.

I kept the nature exercises in The Sky and Earth Touched Me simple, to help people have experiences that aren’t filtered through the mind. Science describes life, but calm, intuitive feeling perceives it directly.

Q: Are people healed by spending time in nature?

Joseph: Coniferous forests give off wood oils that purify the air. The director of the Japanese forest service studied these oils, thinking that they might be healing for people. There are now 44 medical centers in Japan where you can spend two days in the forest and practice “forest bathing.” They give you certain physical tests at the start and before you leave, and they’ve found that being in the forest measurably increases cancer-killing cells and reduces blood sugar, stress, and a bunch of other health risk factors.

St. Bernard said, “I feel taller from walking with the trees.” There’s a Sharing Nature exercise where you enter a forest and stand like a tree, and feel that your body is being nourished by the sun and air. At a certain point you turn over a leaf and breathe the oxygen coming from the tree, and you exhale carbon dioxide back to the tree as you interbreathe with the tree. It gives you a very real experience of the spiritual qualities of trees.

Q: In the Bay Area there’s a place that I’m sure you’re familiar with, Muir Woods. It’s often crowded with visitors, yet when you walk among the redwoods it’s like a cathedral. It’s a vibration of great stillness, and you can feel the healing power of those trees that have stood for perhaps a thousand years. It’s quite wonderful.

It sounds like you’re teaching people to commune with the source from which nature is created, and that we come from.

Joseph: That’s true. If you look at things in a separative, analytical way – “this tree, that stream” – your perspective is limited and superficial. But we can directly experience the common reality that’s animating everything. When you tune in to that source, you feel close to everyone and everything. That’s where the magic of nature is, when you go beneath the surface.

Q: You’ve written a book about the spiritual practice of listening to the creative vibration of AUM. (AUM: The Melody of Love – The Spirit Behind All Creation.) Various spiritual teachings tell us that AUM is the power that manifests the external world. Is that practice a further step that people can take if they want to experience their oneness with creation?

Joseph: It is. Swami Kriyananda said that the way to truly understand nature is to commune inwardly with AUM. Science has discovered that matter is vibration. AUM is the pristine vibration from which nature emerges. It’s the “thought of Spirit.” Spirit is unmoving. It comes forth as AUM to create the cosmos. The vibration of spirit creates this world.

Some religious traditions encourage people to see spirit and creation as separate. Or they don’t understand how the divine Presence gets into creation. Communing with AUM gives us a direct experience of the God who is actively creating the physical world and Who is very present with us.

Each culture has its name for AUM. The Bushmen call it the Hiss of the Stars. The Irish Celtic tradition calls it the Great Song. In Islam, it’s the Amin, and in Christianity it’s the Amen or the Word. Aldo Leopold, the renowned environmentalist and author of A Sand County Almanac, experienced AUM, as did Thoreau and John Muir.

When people are very still they may have an experience of AUM. So, yes, for people with a spiritual interest, AUM can help them commune with the blissful Spirit in creation.